Recently, Oregon enacted a law on paid sick leave and this will took effect last January 1, 2016. It is the fourth state to apply this law after California, Connecticut and Massachusetts.

Although some businesses in Oregon already have their own paid leave policies, the state now sets specific requirements and guidelines such as companies having 10 or more employees must allow each worker to be credited an hour of sick time for every 30 or up to 5 days a year.

The law is applicable to any type of employee, whether they are temporary, part-time, full-time, salaried, or paid on a commission basis. It also goes beyond the traditional paid sick leave policy. Here, reasons for leave include to attend a sick family member, to grieve the death of a family member, and domestic violence, sexual assault, or stalking that affect the employee or the employee’s family members, to name a few. 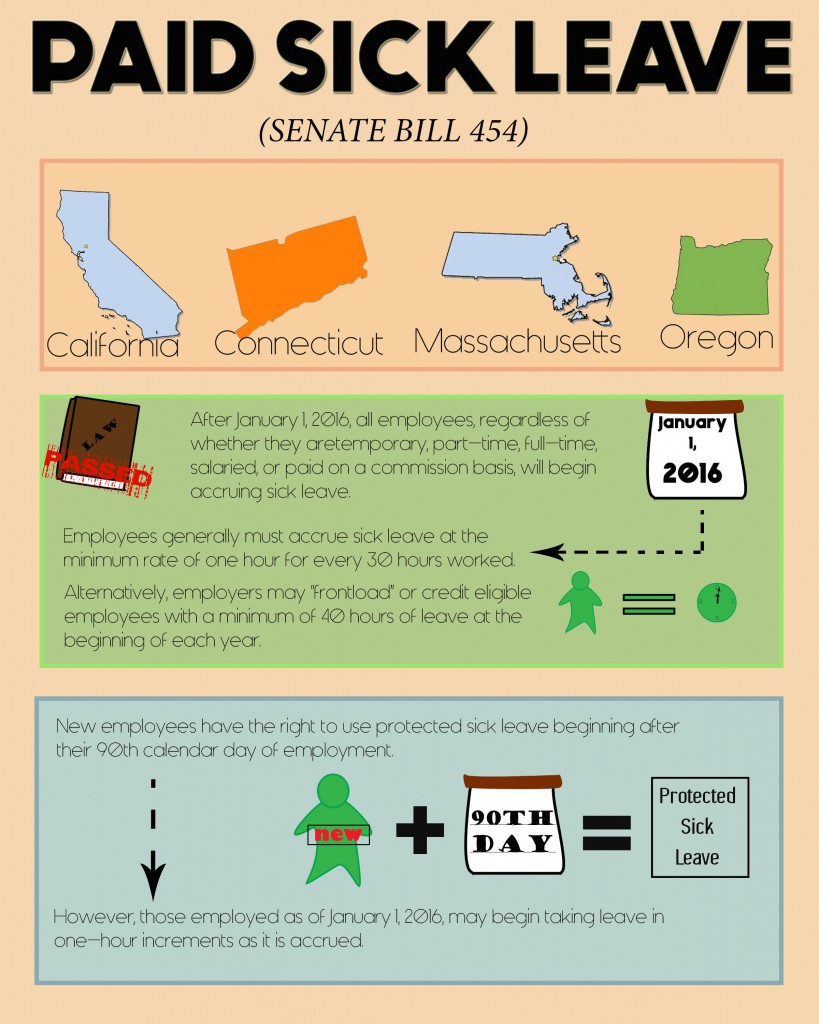 At this point, the law is truly music to the ears for employees. Does the same thing hold true for businessmen?

Impact of Senate Bill 454 to Business

In Oregon, approximately 88,000 employers (almost 96 percent) have fewer than 50 employees– a characteristic similar to startups. Indeed, startup businesses begin with only a few employees and applying the paid sick leave policy may sound risky and costly. This is because aside from paying the worker on leave, startups may have to search and pay for replacement employees. This could also mean companies to hire for a Human Resource officer which is very less likely particularly to tech startups.

Increase in productivity and job satisfaction

Robbins defines job satisfaction as the person’s general attitude toward his job. Although (as of writing) no study can concretely show that both are directly proportional with one another, it can be seen that more satisfied employees tend to have better performance.

Surveys show that just compensation is the #1 factor that matters to employees and thus, affects their level of satisfaction. Robbins further states that positive reinforcement is one of the many tools in shaping an employee’s behavior. As an employee, working in a healthy workplace environment where you also feel comfortable to work with certainly increases productivity. This may also ensure good quality of products or services.

On the other hand, dissatisfied employees tend to have more absences. A worker would think of all possible reasons just to miss work. Leaving the job is the worst case scenario thus, an increase in turnover percentage. According to Bureau of Labor Statistics, 35 percent of American workers get no paid sick leave.

Considering that the worker is in dire need of money and will choose his wage over health, he will certainly go to the office regardless of him being in an unhealthy and sickly state. Most likely, there will be a decrease in the quality of work and the result is not surprising. As a businessman, it is always best to watch out for your workers’ performances.

The law also covers employees taking care of their sick family members. As stated above, this provision is unique from the traditional paid sick leave policy. It may sound a bigger burden for businessmen as the scope and definition of the policy is wider compared to the traditional one. This new provision will mostly affect women or mothers. In 2010, women comprised 47% of America’s labor force. Thus, it can be seen that taking this law into effect greatly affects the performance of the labor force not just in Oregon state alone.

Now, where do all of these lead? Certainly, it all leads to bigger profits thus, faster progress for startups.

Not to put employees in bad light, this kind of policy requires employers to be more cautious and critical. Senate Bill 454 mandates that employers may only ask documentation for sick leave absences that last 3 days or more. Employers must keep in mind that although it provides a win- win situation for both sides, being vigilant is still important especially in upholding good values in the workplace as well as in preventing unwanted and irrelevant absenteeism. As businessmen, it is important to formulate and design policies that will lead to the company’s betterment in the long run.

Company policies are usually ignored by startups especially those engaged in the tech industry. It is because with enough resources which may include a personal computer and a stable internet connection, workers can actually work at home. But, this way of thinking must be eliminated as company policies are very vital for its growth especially in the long run.

1 thought on “Paid workers’ leave: Boon or Bane? The Benefits of Senate Bill 454 to Employees’ Productivity”