The gap continues to grow between the merely rich and the super wealthy, as the fortunes of a select few reach new levels. A record 2,208 individuals made Forbes’ annual list of billionaires in 2018. Collectively, their worth is valued at a staggering $9.1 trillion, an 18 percent increase from the previous year. The world’s 20 richest billionaires are worth $1.2 trillion combined. That amount is approximately the equivalent to Mexico’s annual economic output. In aggregate, they may account for less than 1 percent of all billionaires, but their riches represent 13 percent of the accumulated fortunes of all billionaires on the planet.

But what can we learn from the richest people in the world? And just how did they reach their levels of success? Let’s examine the career trajectories of three of the highest-ranking billionaires on the list, starting with the man sitting right at the top. 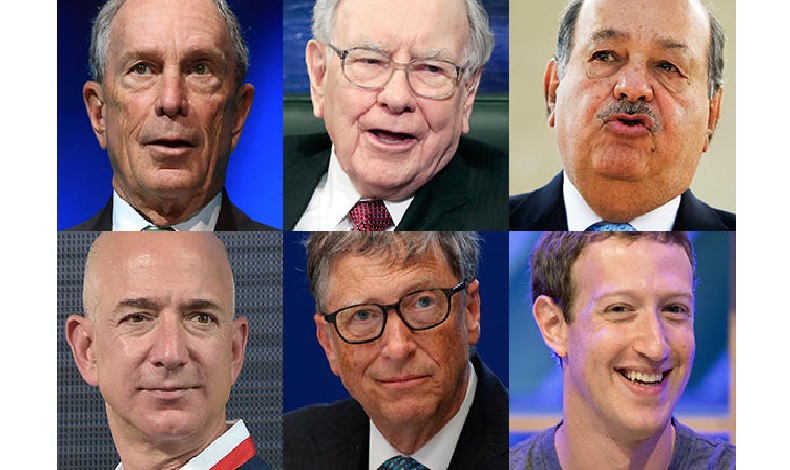 When Jeff Bezos left Princeton, he wanted to start a business immediately. However, as he didn’t have an idea he felt confident in, he chose the employment route, going from one job to the next. At 30, he was well-paid, successful, and just a few months away from his annual bonus. Yet, at that point, he was determined to realize his dream, and so he chose to walk away and start a company, regardless. It wasn’t until a year after he left his job and moved to Seattle that he founded Amazon.

Bezos was attracted to a report that he read, which projected a 2,300% industry growth rate for e-commerce when the internet was still unexplored by the majority of Americans. Investigating 20 different retail markets that he could foresee e-commerce really disrupting, he decided upon books: A huge – $82bn – market with products that were low cost, and could be sold anywhere and to anyone.

After following his heart and having achieved such success, Bezos advises entrepreneurs to ask themselves what their heart is telling him. Quitting a well-paid job isn’t always the smart thing to do, but if you have enough passion and insight, as Bezos did, it might just be the best move you’ll ever make. Ironically, many are doing just that to start a business on Amazon itself.

Shortly after Mark Zuckerberg started at Harvard University, he earned himself a reputation as a talented developer. He first developed a hot-or-not app called Face Mash, which used photos of others in his class that he managed to hack from the institution’s dormitory ID files. In its first four hours of going live, the site received 22,000 page views. Harvard ordered Zuckerberg to take down the app, citing security and copyright concerns. He then created “The Facebook” with a number of his friends from his dorm, before dropping out of school after his sophomore year to work full-time on the project.

Zuckerberg’s company managed to raise $12.7mn while he was barely 21. He was named Time magazine’s Person of the year in 2010. The movie The Social Network, based on how the company was founded, was released in 2010, earning eight Oscar nominations and $224,9 million at the box office. While Zuckerberg insisted that many details in the movie are incorrect, his journey from being a millionaire to a billionaire in a single year, from – the age of 22 to 23 – remains an astonishing feat, as can be seen in a Betway Casino infographic of Forbe’s millionaires to billionaires.

Zuckerberg doesn’t give many interviews, but he offered his thoughts to entrepreneurs when speaking with Y Combinator. He advised aspiring business owners to start by looking at a problem that they’re trying to solve in the world, adding that the world’s best companies drive social change. Maybe that advice is more valuable than going to business school, seeing as Zuckerberg managed to become one of the richest men on the planet without a degree. Harvard awarded him an honorary law degree in 2017, while Facebook continues to be a hugely popular social media platform for both individuals sharing stories and business looking to increase engagement.

Buffet graduated from the University of Nebraska. After being turned down by Harvard in his pursuit of a postgraduate degree, he was accepted by Columbia. It was there that he studied under the father of value investing, Benjamin Graham. After completed his studies, Buffet was again rejected: this time by Graham after asking for a job working for his mentor. Graham even advised Buffet against choosing a career on Wall Street.

Buffet went back to Omaha to work for his father’s brokerage firm instead. However, Graham later changed his mind, and Buffet uprooted to New York. While in New York, Buffet built upon the investing knowledge he had gained while studying under Graham at Columbia. Buffet internalized a concept he coined “intrinsic value”, but wanted to take it further by looking not just at the numbers but also at the firm’s management team and it’s product’s competitive advantage. He again returned to Omaha in 1956 when he founded Buffet Associates Ltd.

In 1962, he teamed up with Charlie Munger, resulting in the development of an investment philosophy around Buffet’s view on value investing as more than a bid to get the last few pennies out of failing businesses. He acquired more and more stock, and managed to retain an element of mystique until tech stocks grew in popularity. A self-confessed technophobe, Buffet refused to invest in tech firms, leading to experts on Wall Street writing him off as yesterday’s man. Many of those experts went bankrupt during the Dotcom bubble, while Buffets’ profits doubled. While there’s a lot of sound investment advice available by Warren Buffet, in a pearl of wisdom to today’s shareholders, Buffet’s offered his golden rule: Forget everything you know about purchasing fair businesses at great prices but buy great businesses at fair prices.

Bill Gates at #2 and Bernard Arnault at #4 round out the top 5. In compiling its list, Forbes takes a snapshot of wealth using exchange rates and stock prices. They value various assets, including real estate, private companies, yachts, art, and more.