“It’s the idea that counts”. It’s a quote from the movie, Tucker: the Man and his Dream, which is based on the true story of Preston Tucker and how he tried to change the world with his ideas. There’s a big chance that you might not heard of him. Nonetheless, Tucker’s innovations left a mark in the automobile industry and in fact, these are still used in the cars today. 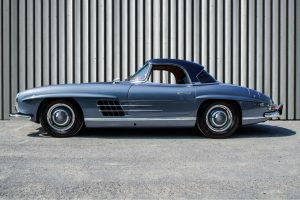 You may ask, to whom do we owe the features of our car like the aerodynamic styling, padded dash, pop-out windows, seatbelt, fuel injection and disc brakes? Those car features were first available in the 1948 Tucker cars. And 67 years later to date, 47 out of the 51 cars (50 production and 1 prototype) built are still in good condition and are worth a ransom. The most expensive Tucker was sold for $2.65 million at an auction on 2012.

The Making of the Tucker Cars

After World War II, Tucker thought that the people wanted to have a new car. He wanted to give them a car that’s ahead of their time. The new car that he achieved to build includes many features that were not seen in any car built during his time.

But Tucker didn’t go through the easy way on building these cars. He experienced a lot hardships and encountered a lot of problems. His ideas were not taken seriously, his cars lack funding, and the Board doubted his capabilities to lead the company and eventually, ousted him.

Despite all the obstacles hurled past him, Tucker cars served as a monumental edifice to his ideas and innovation.

5 Lessons that you can learn from the movie, Tucker: The Man and His Dream

1. Work Hard and Be Positive.

From the beginning, Tucker’s ideas were met with opposition from everyone around him except his family who stood by him through thick and thin. But he never gave up that showed his iron- will and determination to succeed.

As Tucker said, “Being successful is about fulfilling your dream and seeing it become a reality.”

It might sound cliche but this quote embodies what Tucker valiantly fought. People laughed at him thinking that his plans were impossible. They criticized his ideas. Faced with problems after problems, Tucker didn’t gave up on his dream.

If you believe that you can do it, then go ahead and do it. Don’t let anything stop you. It’s just a matter of believing in yourself. And building a team who sees the vision and supports your company to succeed.

As seen from the movie, Tucker is a model employer. He is open to the ideas of his workers and also gives credit where credit is due. When his team said that it can’t be done, Tucker pushed and encourage them to develop their potentials and achieve more than they could imagine.

It cannot be stressed enough that you need to treat your employees right to get them motivated at work and produce results for your company.

In starting a business, it’s important to know your partners and hire people that helps your company to succeed. In the movie, one of the reasons why Tucker was unsuccessful with his company was because he was betrayed by the very people that he trusted. Before he knew it, Tucker caught himself ousted by the Board and rendered powerless. It cannot be stressed enough that loyalty is a virtue that you need to look for in your team.

Tucker is a dreamer. A man who had big dreams and make it happen. He innovated the cars of his time and changed the face of automobiles.

One of the most important scene in the movie was when Tucker made his closing arguments in front of the jury. We can see the passion and the sincerity of his speech when he mentioned the people that inspired and fueled his desire to achieve his dreams- Edison, Wright brothers and Henry Ford.

In the movie, Tucker said, “I grew up a generation too late, I guess, because now the way the system works, the loner, the dreamer, the crackpot who comes up with some crazy idea that everybody laughs at, that later turns out to revolutionize the world – he’s squashed from above before he even gets his head out of the water because the bureaucrats, they’d rather kill a new idea than let it rock the boat! If Benjamin Franklin were alive today, he’d be thrown in jail for sailing a kite without a license!”

During his time, society was not yet open to his ideas. The major obstacle came from the Big Three who deceitfully exerted all means leading to the closure of the company of Tucker. His opposition might seem too powerful; however, they were not able to crush the ideas of Tucker and what he stood for.

Fortunately, America underwent a transformation, and is now more open to innovation and change.

The Tucker film reminds us that we should pursue our dream no matter how impossible it might seem. Tucker embodies a protagonist who beat the odds pursuing his dreams and leaving a legacy that will inspire generations to come. As Tucker expressed, “It’s just the machine. It’s the idea that counts.” Indeed, his life and legacy stood as an edifice that we can achieve more than we can imagine by pushing the imaginary boundaries set by society.

2 thoughts on “Tucker’s life and legacy of Innovation captured in a moving, inspiring film”