When we think of the United States of America, one of the first things that comes to mind is the notion of the “American Dream.” The American Dream has been a major driving force in the development of the USA as a nation. It has contributed both to the shared sense of identity that many Americans have felt throughout their nation’s history, and driven large swathes of immigration to the country.

So central to American identity is the notion of the American Dream that it has been the subject of much literature and academic study. Writers F. Scott Fitzgerald and John Steinbeck of the famous novels The Great Gatsby and The Grapes of Wrath have placed the notion of the American Dream at the center of their focus. Many college students have similarly chosen to dedicate their university writing to the ideas of happiness espoused by the American Dream, often in criticism. Examples of this type of paper or essay do a good job of demonstrating how the American Dream is interpreted by the youth. Comparing an older essay to a newer one also demonstrates the drastic changes that the way this concept has undergone in the eyes of the youth over the past few decades. 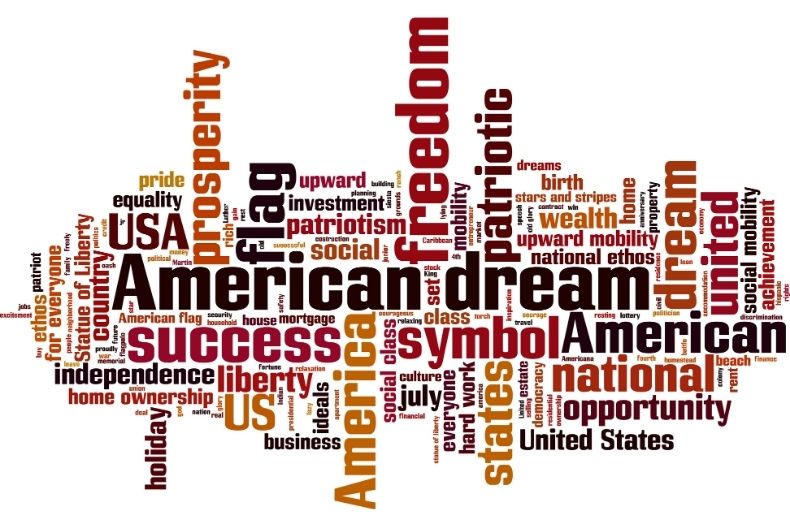 The values that are encompassed by the American Dream trace their origin all the way back to the foundation of the country. The USA is a society that was fundamentally founded based on a desire for liberty from the traditional social structures of Old Europe. The Declaration of Independence enshrined the values of the American Dream by positing a society in which every man was born equal and had the right to equal opportunity. Of course, at the time, this didn’t include America’s large slave population nor the female half of society. However, this emphasis on “liberty” has played a large role in the formation of American identity. But there’s always the flip side of the coin.

Historically speaking, a belief in the American Dream caused many waves of emboldened immigrants to pack their bags and sail off to the New World. These hopeful arrivals came to the US’s shore with the belief that no matter where or what they had come from, they could create a better life and climb to the top of society. Many people came to the USA in pursuit of an education, or with the hope of setting up a business and making a fortune in a society that rewards innovation and capitalist ventures.

Flaws in the Dream

While there are, of course, prominent examples of success stories of the American Dream, such as innovators such Steve Jobs and J.D. Rockerfeller, more often than not those who chase the American find themselves not being able to climb very far up the ladder of success. Access to wealth and a top tier education are still almost always reserved for those who are already elite members of society. Immigrants often find themselves leaving middle-class backgrounds in their own country, only to become trapped in a cycle of poverty once they reach the USA.

Furthermore, while originally upheld in the name of liberty, the aspect of the American Dream that believes that the government should stay out of its citizens’ affairs has now taken on a darker inflection. A suspicion towards government intervention has now led to many Americans living without important social security support systems like healthcare and minimum wage rights. Many Americans, even those natively born there, spend their lives paying off debts accumulated through healthcare and college tuition. In this sense, the USA is unique as a rich nation. Just about every other rich nation in the world offers its citizens healthcare and subsidized education. This is another major contributing factor to a lack of social mobility experienced by many who chase the American Dream.

While it may have been founded on well-meaning intentions, the promise of the American Dream is clearly out of the reach of many. Most of the people who dedicate themselves to chasing this dream will end up just about where they started, if not worse. And it is the youth, more than any other group, who see the false promise of this dream. With student debts rising, and far less opportunity for entering the property market than previous generations, much of the youth of today interprets the American Dream as an American nightmare.