How the economy will be affected by Entrepreneurship

Heizo Takenaka
(autobiography) – He graduated from Hitotsubashi University (known as a leading Business College in Japan) and joined Japan Development Bank (now Bank of Japan). Studied at Harvard University (1981) and became a researcher for University of Pennsylvania. In 1989, he got appointed as an Associate Professor at Harvard University which then brought his promotion as the Minister of State for Economic and Fiscal Policy last 2001. In 2004, he was elected to the House of Councilors and thereafter served as the Economic Minister until his political retirement in 2006. At present, he’s a professor at Keio University and a Global Security Research Institute Director for Japan Center for Economic Research. He also serves as a Special Advisor to a respective number of conglomerate executives like Pasona Group and other competitive industrial corporations.

Now that the Japanese economy is changing through Abenomics , this in many ways have brought a positive opportunity for entrepreneurs and has a good impact for the Japanese people despite mounting criticism from cynical groups. Heizo Takenaka is one of the experts when it comes to Japanese economy and we would like to take up on his opinion regarding these matters.Aside from the upcoming 2020 Tokyo Olympics, he believes that Japan has an extraordinary opportunity awaiting in the future.

Q: In relation to the present and future situation of Japanese economy, how do you think it will impact the entrepreneurs?

Our economy is always promising and there are a lot of rising opportunities. But now is the time to take advantage all the more. The fact that the entire economy’s improving is a good indication, although at some point may be unpredictable. Japanese stock prices however have spiked up to 57% the past year. This number is by far the first place in developed countries and twice the rate of America. But there’s still more to improve in terms of economic handling.

Q: Are we in a good position?

In most cases, but there are a lot of uncertainties. Minor things like the global economic stability is still being determined in the process of synchronization. We are also prone to negative effects. It’s risky in the sense that the result may vary big compare to the past. I’m thankful that Japan was given the chance to host the 2020 Olympics. It’s a rare but special opportunity. Since the Olympics will likely attract 70% of the world’s population, it could become something special and I think many
things can happen from there on.

Tokyo’s foundation has been set in the early ‘50s where the previous Olympics have been held. First, the Shinkansen Railway Lines was opened in commemoration to the 1964 Tokyo Olympics. It enabled the connection between the National Stadium and the Shibuya gymnasium for Olympic purposes. Secondly, it endorsed the opening of new hotels like Hotel Okura, New Otani and Tokyo Prince Hotel with regards to the Olympics as well. If you look at this, there is a huge impact brought upon Japan because of this. Based on statistics done by the University of California, according to their analysis, the coming Olympics will pave the way for a progressive domestic reform and determine the economic flow of the host country. 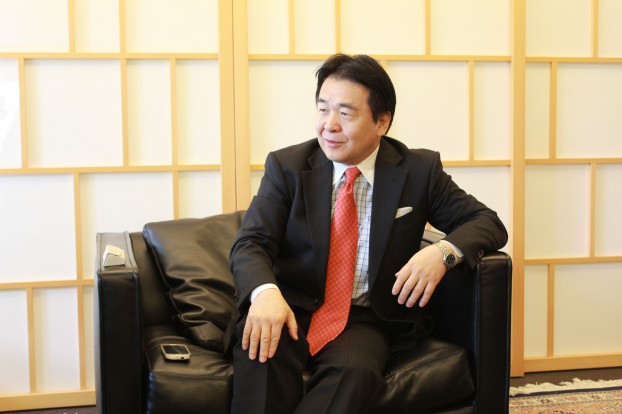 It’s important to be apprehensive about these plans during the next 6 years.

Q: I certainly imagine that there will be several infrastructure advances. Has there been any expansion from a business outlook from that time of Tokyo Olympics 50 years ago?

The distinction of men & women toilet signage was implemented during that time. It was a brilliant industrial design approach as silhouette signs aren’t enough. Because of that, we have become a global standard for the world to follow. It was also during that time where the Security Business began. Business VIPs were escorted and Japan’s security force was strengthened. Now called SECOM (the largest pioneer security company in Japan). Establishments were also doing well. A good industry example that grew from 2 employees to over 530,000 as of the moment. From then on, several changes have occurred that spurred growth for Japan.

Q: Has Japan’s potential evolved enough over the years?

It was developing then as you said. A lot of progress was made back then but it’s a different case now. The fact remains that we’re still looking for more innovation. For example, there are 100 airports all over Japan that aren’t used accurately. Over 500,000,000 people are here now but the average Asian middle class will be multiplied 3.5 times in 2020 during the Olympics. This factor alone could activate the utilization of our airport areas using LCC and this is very achievable. On anticipating such changes in our developing nation, the Olympics would be a suitable timing right? It’s important to be apprehensive about these plans during the next 6 years.

Q: Will it be an exciting 6 years?

Neither a politician, a bureaucrat nor a scholar can predict for sure. Japan’s macroeconomics is finally normalizing. The unexpected thing for a young person is
to do business in that context. Adding the special event of the Olympics from which
70% of the people will be flocking in our country. In other words “ The fair Olympic
wind is blowing in favor to Abenomics” (laughs)

You can start your entrepreneurship groundwork even if the conditions are unclear.

Q: You often say that there is equally less business ventures and bankruptcy in Japan. What does this mean for an entrepreneur?

The bankruptcy rate is small, where the company’s profit margin is struggling to survive. That only means, its corporate management is unstable. Also due to Japan’s conservative culture, most people would rather choose to stay quite even though
injustice is practiced. This would basically result to an unproductive company. What I recommend in my industrial competitiveness conference is increasing the number of independent external directors amending the company regulations and strengthen corporate handling as a proud leader. I guess you can also call them entrepreneurs. I want young people to have the courage to stand up and influence the next generations.

Q: Is youth a vantage point in entrepreneurship?

As President Hirasawa said not to outcast the older generations in his various lectures. Most entrepreneurs start at the age of 26 when they still got nothing to lose. I’m happy at the thought of Akimitsu Sano who created COOKPAD and when asked why he started the business of a recipe site he simply said, “ Because I want a happy society. Happiness starts at the family table. We wanted to offer free recipes as a contribution to the society. It’s essential to know what you are doing because the market is full of competitors. “ This is the kind of opinion you want to hear from young people.

Q: So you mean any approach will do in terms of starting up a business?

That’s right. Like my good friend, Mr. Shenji Tanimura’s (famous Japanese singer-songwriter) case, he thinks delivering and making songs is his destiny. But when he started his career, all he wanted was to be cool and get attention. I believe the
important thing isn’t how we do it as long as we do it. Anyone can start their
groundwork even if the conditions are unclear. Pursue your passion and don’t forget
why you started. Same applies to Mr. Masayoshi Son (founder of SoftBank Mobile/richest person in Japan) he said, “ Entrepreneurs who started business for the sake of profit eventually failed. But entrepreneurs who wanted to do something passionate and took the risk ultimately succeeded. “ Mr. Son had vague ideas at first but he was fervent about his goals and along the way he realized he wanted to contribute to the society through Information Technology. 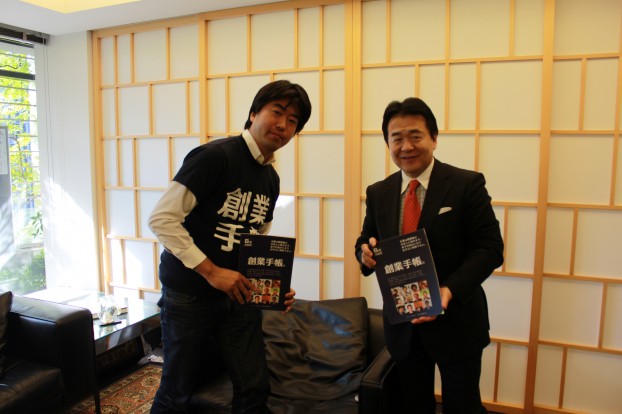 Entrepreneurs are the only ones who can bring innovation.

Q: What do you think is the impact of entrepreneurs to our society?

They are the driving force for development of major innovations.
Entrepreneurs are the only one who can bring out these innovations. We all want a
better life. And they can help us attain that. The role of the government is just to
create an environment for them to perform possible activities that will produce value. As GDP is the sum value added by private enterprises so I think deregulation is needed. It will likely lessen the burden of the salarymen and corporate tax will be lower which is also a benefit.

Q: As you’ve mentioned, is the corporate tax in Japan severe?

A: Japan has a very high rate. We have a 35.5% effective tax rate whilst Hong Kong and Singapore only has 17%. Although UK is 24% and Prime Minister Cameron was responsible for making it go down to 20% as been declared last year.

Q: Do you have any final message of support for entrepreneurs?

Even in the absence of an economist, the economy still goes around. But if there aren’t any entrepreneurs, the economy will stop. By all means, entrepreneurs are greater than economists. In the same manner, I admire artists, for without them there will be no art. Entrepreneurs can make something out of nothing, which is also a form of art. There aren’t so many of them so the economists get more attention. We’ll all agree that entrepreneurs bring the change. In the words of 20th Century Economist, Joseph Schumpeter: “ Original innovation is a by-product of new combination and ties. Industrial Revolution is happening now. Especially in conjunction to Digital Technology. This is the age of entrepreneurship. Not everyone knew GOOGLE 20 years ago right? And now it has become one of the world’s largest companies. 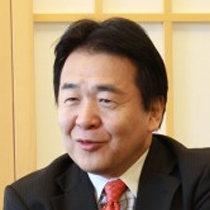 Japanese Economist & Former Politician
Japanese Economist & Former Politician
In 2004, he was elected to the House of Councilors and thereafter served as the Economic Minister until his political retirement in 2006. At present, he’s a professor at Keio University and a Global Security Research Institute Director for Japan Center for Economic Research. He also serves as a Special Advisor to a respective number of conglomerate executives like Pasona Group and other competitive industrial corporations.