Back in the late 90s and early 2000s, the Internet was a much more anonymous place where users could feel free to exchange files and opinions without disclosing their identity, should they wish to keep it hidden. Fast forward to 2020, and the World Wide Web has become almost unrecognizable. With the rise of social media, everyone’s personal information is out in the open, and due to the sheer popularity of these websites and apps, nearly every post or comment is signed with your own name.

Many companies are using it to their advantage, with personalized ad services making use of your IP address and the information gathered from your online activity to try and sell you products they think you’d like. Even more concerning is the fact that anything you do on the Internet can be tracked and analyzed by other entities, such as law enforcement agencies or black hat hackers.

This is when a VPN could come in handy. Short for “virtual private network,” this software can hide your IP and mask your connection as coming from an entirely different country! Not only does it protect your privacy, but it might also be the answer to your questions if you’re wondering how to get American Netflix in the UK or trying to access certain geo-locked content. 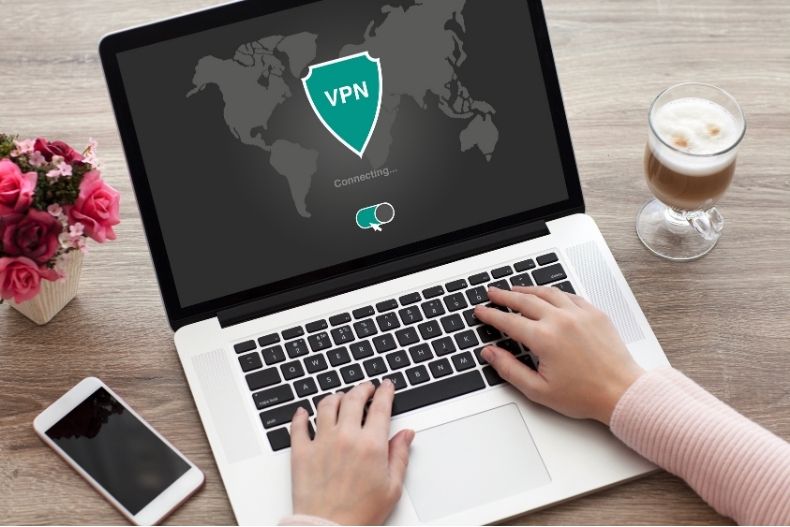 How Does a VPN Work?

In short, when you’re using a VPN, the service masks your actual IP address from every site and user on the Internet by showing your connection as coming from a completely different server, located somewhere far away in another country.

The VPN service provider routes your device’s internet connection through a private VPN server belonging to whichever company’s services you enlisted. This creates a virtual tunnel, through which all of your online activity travels through. Instead of directly communicating with social media apps and other websites, your data is seen as if coming from the VPN providers’ servers.

Additionally, VPN protocols are heavily encrypted, which means that all of the data you’re transmitting to and from the VPN server is transformed into incomprehensible gibberish. Your computer and the virtual private network server are the only ones with the key to reshaping it into readable information. That way, on top of hiding your geographical location, your VPN also protects you from cyber-attacks by making your data unintelligible. Even if it got intercepted, the hackers wouldn’t be able to make much use of it.

When Should I Use a VPN?

Many Internet privacy advocates would tell you that you should always have your VPN turned on and connected. While this certainly is the safest option, you might get away without being constantly connected to a server in a faraway land.

Since they’re most vulnerable to exploits and all sorts of digital attacks, you should always use a VPN when connecting to a public Wi-Fi network, such as the ones available at airports or coffee shops. Even not very skilled hackers can easily breach their security protocols and have full, unrestricted access to all devices currently connected to the network.

Using a VPN can also be a lifesaver when traveling, certainly in parts of the world where internet access is heavily restricted and the local government prevents its citizens from accessing various websites. The most prominent and obvious example of this is the People’s Republic of China, where authorities have prohibited citizens from accessing Western social media applications and other websites, such as Google, Facebook, Instagram, or YouTube, amongst many others. You should download a VPN before going there to make sure that you stay in touch with friends and family without having to rely on Chinese alternatives (which come with a whole plethora of their own privacy issues).

Finally, VPN use is a great way to bypass geographically-based content restrictions on entertainment websites, such as YouTube or Netflix. The TV show and movie libraries on the American version of the streaming giant are undeniably much richer than their European counterparts. If you want to watch something that’s not available in your local iteration, the only way to make it work is via a VPN connection.

Keep in mind, however, that recent updates have enabled Netflix to detect some VPN clients and prevent you from accessing the site altogether. Thankfully, that’s not the case with all providers. If you want to use VPN solely for the purpose of unlocking geo-locked content on various streaming services, you should do some research to be certain that the VPN provider you’re interested in can actually bypass Netflix’s clever algorithms.

Regardless of whether you want to be safer when connecting to public Wi-Fi access points, or simply hide your PC’s IP on the Internet, a VPN service is the best way to ensure privacy and information security on any network.  You need to remember that every VPN client is different, and some of them can actually exploit and gather your personal data.

Beware of sites that offer free and unrestricted VPN services, as these usually turn out to be scams. Maintaining server infrastructure in various countries around the world is an expensive operation, and these VPN companies have to cover the costs somehow. If their financial wellbeing isn’t supported by user subscription fees, they might just support themselves off of selling the personal data to ad companies, becoming the very thing they swore to destroy.