Pedestrian safety is something we often don’t give enough thought to. If you live in a big city or an urban area, it’s especially relevant to your life, but it can be important to understand even if you live in a less congested part of the country.

More recently, a 51-year-old woman was fatally hit by a driver on the Upper East Side. The pedestrian was at a crosswalk on East 76th St. and Third Avenue at around 6:30 in the morning. An Audi sedan struck her, according to the police.

She was pronounced dead at the scene.

While big cities tend to see more pedestrian accidents by nature of how walkable they are, again, it’s something everyone needs to think about. It’s also something to teach children about.

The following are things to know about staying safe when you walk on the roadways, whether you’re on foot to travel somewhere or you’re exercising outdoors. 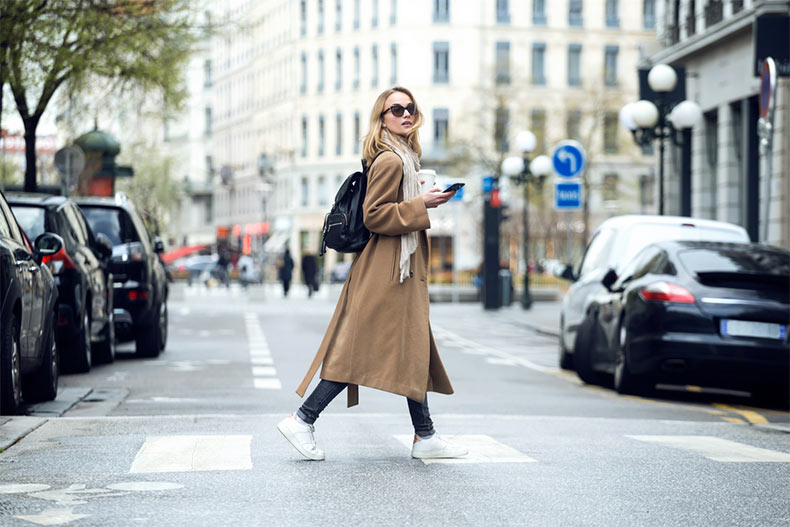 Any time you’re walking, even if it’s not in a highly trafficked area, it’s important to make yourself visible.

Night is particularly dangerous if you’re a pedestrian. Around 32% of all fatalities involving pedestrians happen between 8 p.m. and 11 p.m.

You should bring a flashlight any time you’re out at night and stay in areas that are well-lit when possible. You should especially stay in well-lit places when you’re attempting to cross a street.

Another part of making yourself visible includes making eye contact with drivers. Nod or wave if the situation calls for it to ensure that you have the attention of an approaching driver.

Be Careful When Crossing

Don’t forget the classic rule—look both ways before you cross any street. If you’re at intersections that are controlled, cross only when you have the pedestrian light to do so. Even when you have the go-ahead from a pedestrian light, be aware that drivers and cyclists might have a green light to turn. They might also be turning on red, and they won’t be expecting you in a crosswalk.

If a driver might be turning, make eye contact. Wave and make sure they see you. If there’s an interaction between someone on foot and a vehicle, it’s only going to end poorly for the pedestrian in comparison to the car.

You might also have the urge to jaywalk, but along with the potential for getting a ticket, you’re putting yourself in harm’s way.

Even when you’re obeying all the signals and traffic signs, a cyclist or motorist might not notice you. You need to be mindful of your surroundings at all times.

If you’re at an intersection, always anticipate the possibility a driver could run a red light. Look around before you step into the road no matter what, and check the direction a car may be coming from to make sure drivers that are approaching can see you.

Unless you’re on a sidewalk that’s separate from the road or you’re in a wide pedestrian/bike lane, you should walk single file. Being single file is especially pertinent if you’re on a curvy road. When you’re walking along a curvy road, traffic has less than a second to see you before potentially hitting you.

If you’re walking in a line of two or three, not only is it generally more dangerous but you might get caught up in conversation, making you pay less attention to what’s around you.

Watch Out for Vehicles Backing Up

There are a couple of main scenarios where a pedestrian could encounter a vehicle backing up. One is when a walkway is crossing a driveway, the second is when you’re crossing between parked cars, and the third is when you’re in a parking lot.

When a driver is backing up, they might not be able to see directly behind them. They may not be looking for pedestrians. Pedestrians are also often looking for moving cars rather than parked cars preparing to move.

A hybrid car can be especially tricky because they’re so quiet that you don’t hear the noise you would otherwise associate with a moving vehicle.

If you can, choose routes that don’t require you to walk behind cars. Train yourself to only listen for the sounds of an engine but also to look for brake lights.

Keep Your Own Distractions to a Minimum

You might like listening to music or podcasts while you’re walking or running, but keep the volume at a level that allows you to still hear warnings from other walkers and runners, as well as horns and bike bells. If you’re using earbuds, it’s best to wear only one so that you can hear what’s happening around you.

Distracted walking can have the same risks as distracted driving. Make sure that you’re keeping your eyes up and you’re staying aware of what’s going on around you.

Not only are you going to be more mindful of traffic risks, but you can also watch for tripping hazards.

Keep Your Dog on a Short Leash

If you’re walking with your dog, you want the leash to be short enough that you have control. You also want to be polite to the people who are passing you.

When a dog’s leash is too long, there’s the potential he could run into traffic.