Thinking of a global expansion? Yes and Yes! 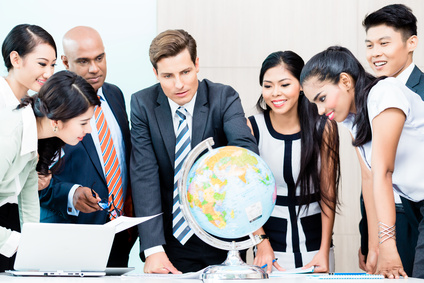 This is even truer when it comes to business. But before anything else let us first establish that expansion is a risk. As a matter of fact, everything in life that requires growth has a minimum risk attached to it. It has always been the paradigm. But if you are in the business of moving forward and aiming to conquer the world by making a difference together with citing a broader market then now is the most suitable time to do so. Whether it is next month or next year, as an entrepreneur.

“We should always have the mindset of expanding globally.”

When they say that the grass is always greener on the other side of the fence, it could somehow be correct but how are you going to prove that if you haven’t been on the other side? Going outside your comfort zone is a calculated risk. That is the first thing everyone should embrace. And that is where your victory march begins.

Speaking for ourselves, we are a Japanese online media company aiming to connect our business culture to the western part. In a perfect world, we would have reached the top by now but anything worth perfecting takes time. Gradually. So for those who are interested to develop their business internationally we are encouraging you to always put that thought within your reach.

How do you expand and where? 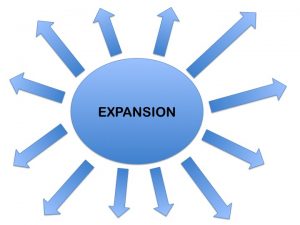 Truthfully global business expansion requires extensive research, background checking, market study and more networking connection. When all this factors are considered, you can start packing your suitcases and head to your destination. And this is where we imply that the next best destination to invest is Japan. Those interested especially in Asian possibilities, JETRO [Japan External Trade Organization] makes a good explanation on why you have to choose Japan as your venture target. For companies planning to start a business

JETRO, is a Japanese government organization dedicated to helping foreign investors as they go through a lot of process whether in establishing a liaison office, branch office or a subsidiary in Japan.

They have free consultation, provide information and miscellaneous services in English and offers temporary facilities as a business base to get started. They also cater to a variety of International Business Matching Program, TTPP [Trade tie-up Promotion Program] and have dedicated a research institute for developing economies to facilitate cooperation between nations. 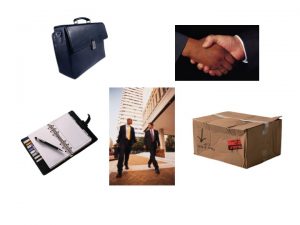 While in discussion with American Affiliates, we discovered that they have unbiased hesitation when it comes to starting business outside their homeland due to lack of culture orientation but mostly because they have no idea where to start from. This dilemma can be remedied with understanding cultural differences and approaching multiple aspects with an open mind. True that the Japanese Market can seem betwixt from someone else’s point of view but it’s not always true in all cases. Japanese people are a hospitable group of people whose more overpowered by shyness rather than audacity.

For a small, isolated island to rank as the 3rd biggest economy based on GDP, this country should tell you something.

Moreover Japan is widely cited as the cradle of Toyota Production Method, which is widely studied and implemented across virtually all American Studies. *Japan has 99% literacy both men and women (up-to-date survey). The population is 120 Million where 26% is elderly (over 65). The speed at which Japan’s population is aging is mainly a result of its rapid economic development. Which is why for the first time in the longest run, Prime Minister Shinzo Abe attempts to open their doors and invite foreign companies to invest and collaborate with the Japanese now more than ever. He has put an end to the closed-door economic era.

The Japanese export boom that occurred from the 1950s through the early 1990s has been a model for countries around the world. The effect has been increased production, quality, and sales competition from these countries. – http://www.maxsacks.com/ – American Executive Sales Training and Development Specialist

These are some of the Top Reasons why you should invest in Japan now!

1. World-class Transportation: The most renowned “Shinkansen” railway infrastructure tops worldwide and up to date, there are no accidents reported since 1964. The average delay time: 36 seconds.

2. Low Crime Rate: Japan is the only country in Asia where you can live the safest. Part of being a calm and disciplined people, they thrive to avoid confrontations and aggressive behavioural pattern.

Or instead of a boring list, for a brief and clearer explanation, we have referred to JETRO’s materials with a more concise picture: 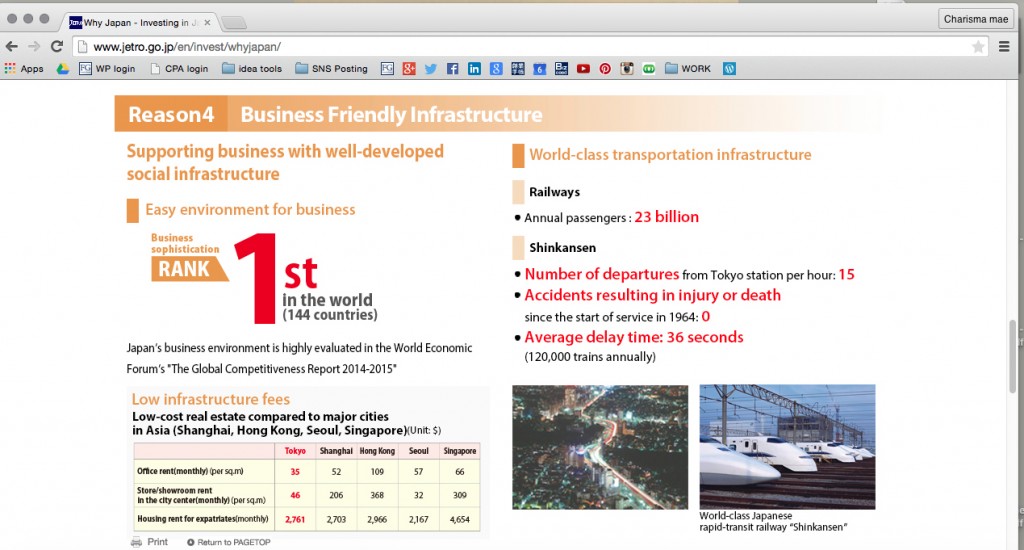 Japan is leading the advantage in Asia in terms of technological advances.
Renewable eco-friendly resources are practiced effectively in Japan as
compared to other asian nations. And the reasons could go on and on. A 2009 survey by the Global Entrepreneurship Monitor (Forbes Magazine), stated that Japan is still underutilized.

In one of the TED Conferences I’ve watched [TEDxTokyo] Patrick Newell stated:

This country innovates in many ways, but doesn’t do the best job of marketing those innovations.

There’s a lot of Innovations in Japan that were already invented a long time ago but due to poor marketing, shy culture and isolated geography, there’s a lot of hidden brilliant ideas that haven’t reached the public yet. Thus if they can communicate their ideas in a universal language (english) then it can be adapted by global users. And perhaps it could lead to a more efficient life. We at Founder’s Guide is in the business of bridging the gaps between external businesses and guiding them to proper channels for assistance and possible partnerships. Some of you who had entertained the idea of opening a company or a branch of your existing company, it is no longer a far-fetched idea. Let us help you in your quest to invest and open opportunities in Japan.

You can take the first step by filling out this form and telling us about your concerns, inquiries and everything else that needs our assistance. Share to us what you think and how we can help. We favor personal discussions and get back to you with results.

Like we always say in Japanese 前向きに! [maemukini], meaning
Proceed to Succeed! 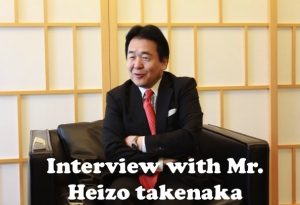 Find out more about Asia in here: 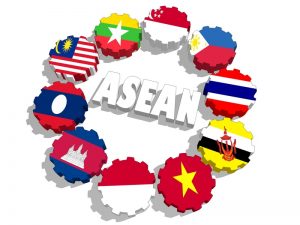