The country’s economic driving force is found in its fifty diverse, but united states. Each states have particular industries as its flagship. Thus, it is worthy to note who are on top of their game.

Here, we are listing the top states in each of the 10 leading industries in America. The listing of the top states per industry category is based on EMSI’s 2013 research study  on the job growth of the different fields in the largest regions of United States.

Among the fifty states, California emerges in the study as the leader in most industry subsectors, that includes Motion Picture and Videos, Management, Scientific, and Technical Consulting, and Real Estate. The state also has the highest number of firms with 701,899, establishments with 864,913, and employment with 12,952,818, among all the other states.

Meanwhile, the state of Pennsylvania leads the industry of Individual and Family Health Services, Legal Services, and Securities and Commodity Contracts. On the other hand, Wisconsin tops in General and Medical Hospitals and Insurance Carriers, and ranks next to California.

In terms of employment rate, New Jersey has the highest rate in the Advertising and Public Relations Industry among the states. Meanwhile, Texas has the most employees in Oil and Gas Extraction. 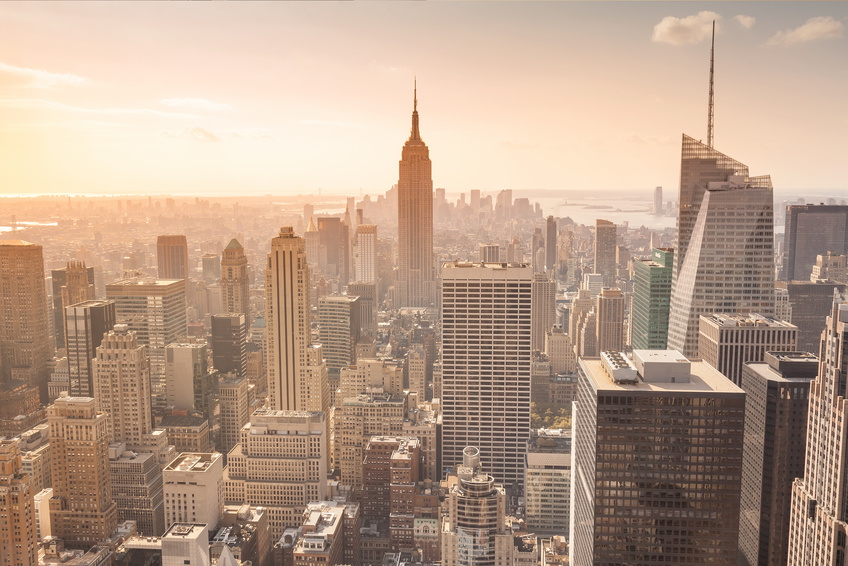 Health industry is the biggest industry with the highest employment rate in most of the states. The combined states of Illinois, Indiana, and Wisconsin reported the biggest share of jobs for General Medical and Surgical Hospitals, with 166,566 jobs in 2013. Workers in Individual and Family Services are highest in Pennsylvania, New Jersey, Delaware, and Maryland, comprising 51,362 jobs in the area.

Florida has the highest number of offices of physicians, while California boasts the most jobs involved in outpatient care. For Specialty Hospitals, Tennessee employs the most people, with 19,766 jobs.

In the next paragraph, Texas is highlighted in the construction industry. The most populous city of Texas – Houston, energy industry such as oil is the main source of its booming economy. However, health care, education, and other related fields such as RN to BSN Houston program form a large scale too. 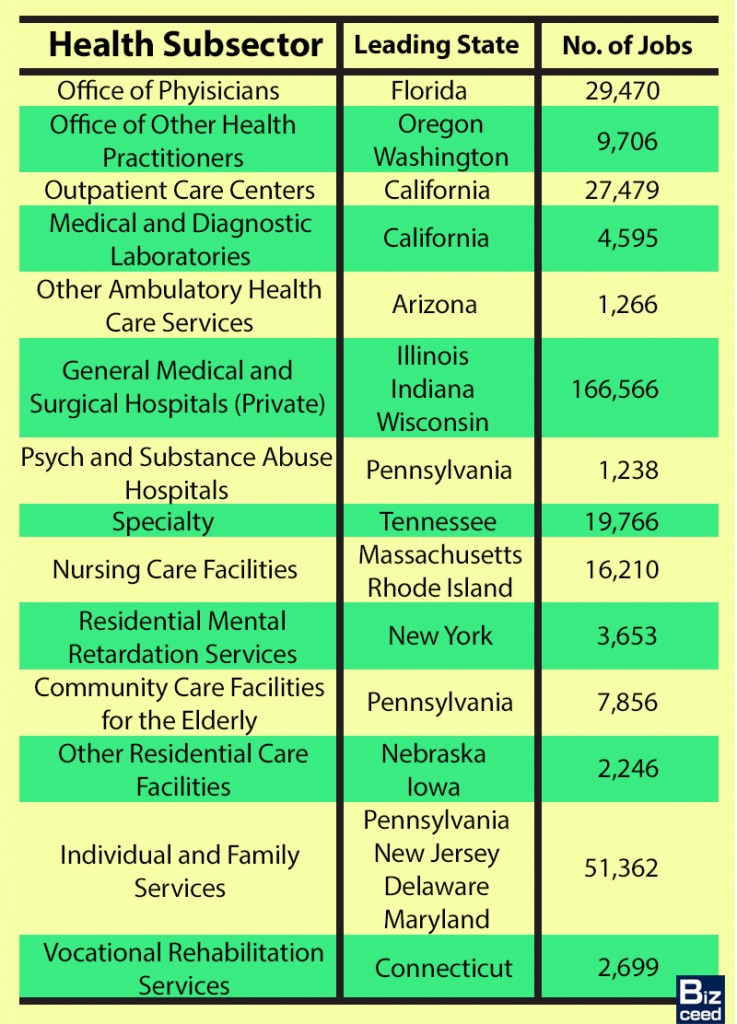 Texas scored the most number of jobs in this industry’s subsector of Utility System Construction. It generated 34, 466 jobs in 2013. Maryland’s Building Equipment Contractors industry has almost as many jobs with 30,035 in the same year. Arizona made 18,578 jobs involving Foundation, Structure, and Building Exterior Contractors, while Louisiana’s Nonresidential Building Construction made 7,468 jobs. 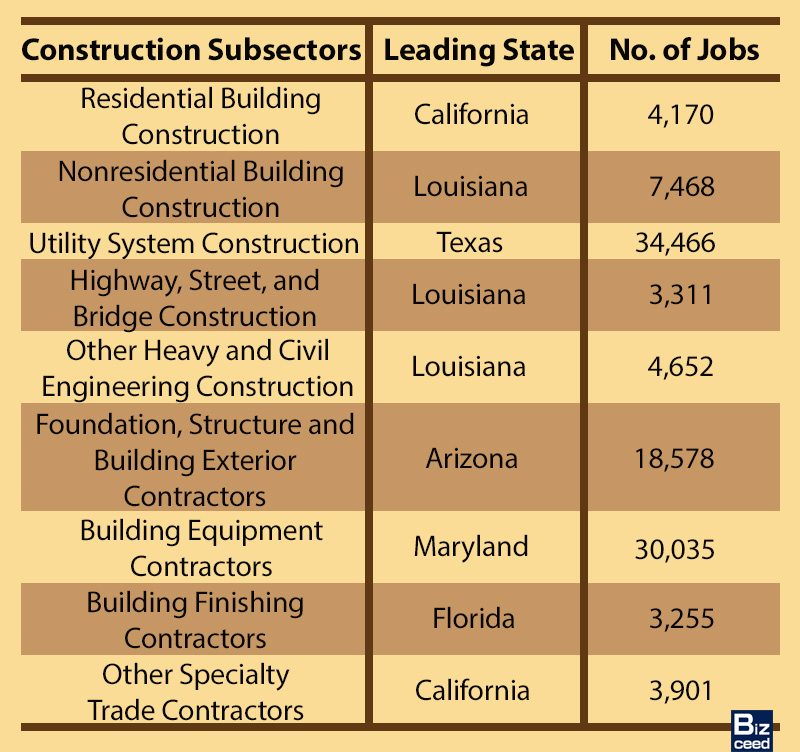 California is the leading employer in the Information industry’s Motion Picture and Video subsector, which reached 138,417 jobs in 2013. The industry is also dominated by the Software Publishers, which composed 51,959 jobs in Washington, the highest among all the states in this subsector. Internet Publishing and other Information Services in New York, New Jersey, and Pennsylvania, garnered 33,150 jobs. The Wired Telecommunications Carriers in Georgia produced 24,934 jobs, while also leading the states in wireless communications employment with 10,620 jobs.

Sound Recording, Radio and Television Broadcasting, Cable and Other Subscription Programming, and Data Processing, Hosting, and Related Services are other subsectors that comprise the industry. 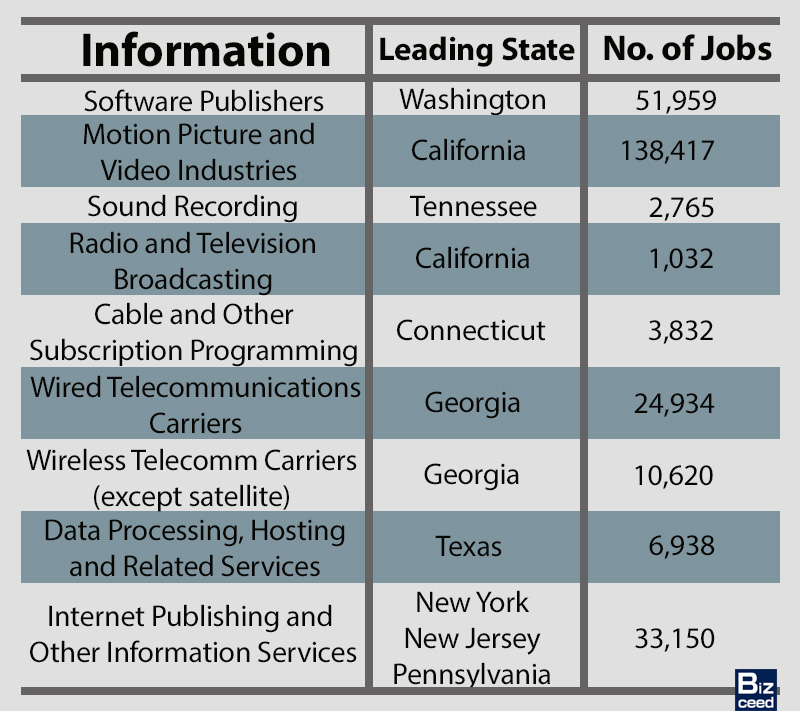 In the energy industry, Texas is the country’s leader in employment in the Oil and Gas Extraction, with 57,050 jobs in 2013. California is the biggest employer in the Natural Gas Distribution sector with 9,041 jobs. Alabama, meanwhile leads in Electric Power Generation, Transmission, and Distribution sector with 6,478 jobs as well as in Coal Mining with 2,565 jobs recorded.

The Professional Services industry has a wide range of sectors that has created jobs all around the country. However, California has the highest employment in this industry, with 172,501 jobs for Management, Scientific, and Technical Consulting and 89, 169 jobs for Scientific Research and Development. In addition, Accounting, Tex Preparation, Bookkeeping, and Payroll Services contribute to 78,552 jobs in the state.

The industry is also comprised of other subsectors such as Architectural, Engineering, Advertising, Public Relations, and other Professional, Scientific, and Technical Services. 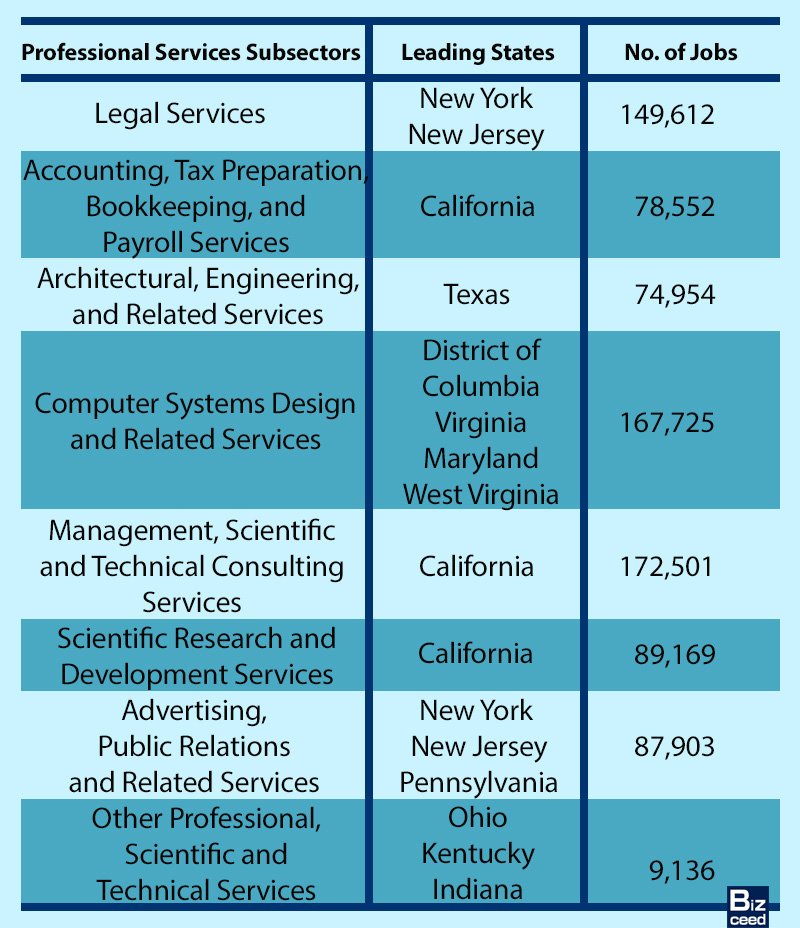 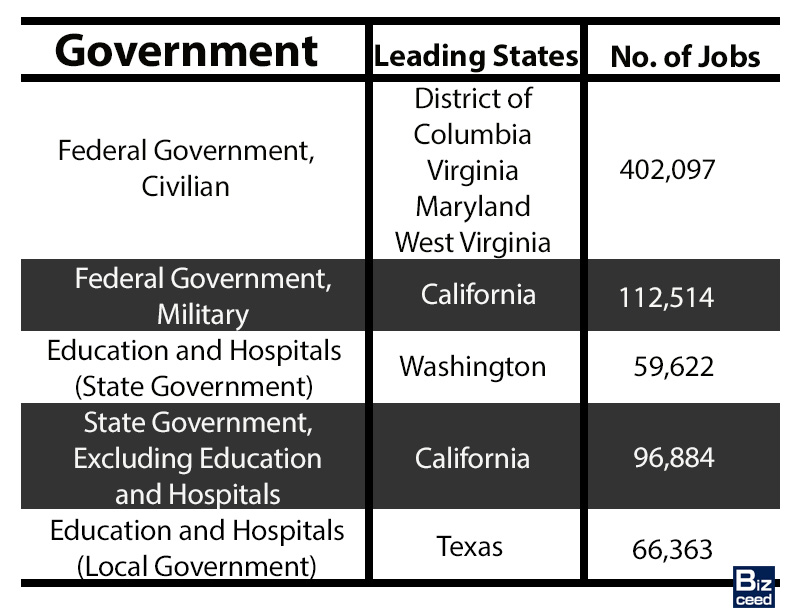 This industry is biggest in the states of New York, New Jersey, and Pennsylvania, w 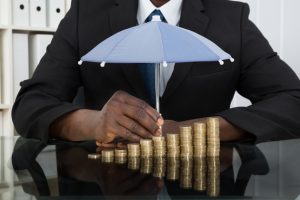 here 132,673 jobs can be found in the subsector of Securities and Commodity Contracts Intermediation. These states also have the highest employment in Financial Investments with 83,449 jobs in total.

When it comes to Nondepository Credit Intermediation, Texas takes the cake with 47,559 jobs, the highest in the country. Minnesota and Wisconsin lead the Insurance Carriers subsector with 39,534 jobs made. 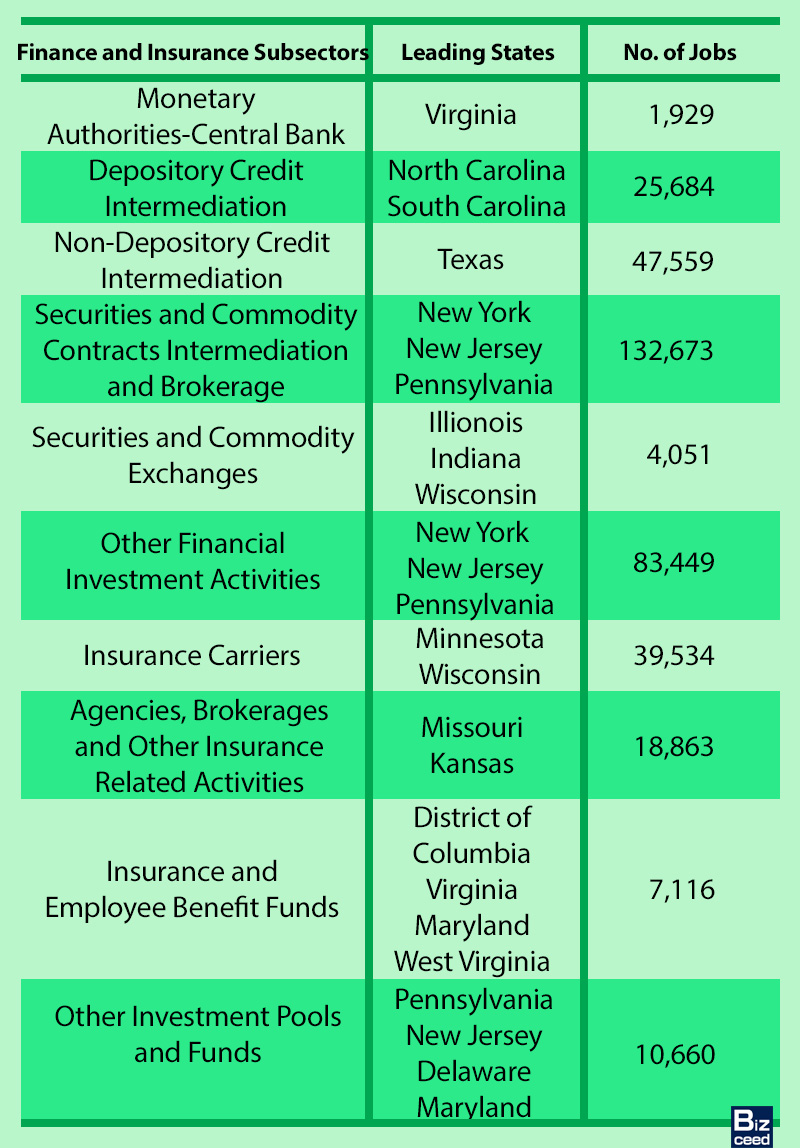 The leading states in the Educational Services industry in terms of employment Colleges, Universities, and Professionals schools are New York, New Jersey, and Pennsylvania with 171, 367 jobs in 2013. Elementary and Secondary Schools (Private) employment, on the other hand, is led by the state of Louisiana with 11,130 jobs. Educational Support Services employment is highest in California with 2,252 jobs under the subsector.

California’s Computer and Peripheral Equipment and Semiconductor and Electronic Manufacturing are dominating these subsectors with a total of 83,781 jobs created. Texas has the highest employment in Agriculture, Construction, and Mining Machinery Manufacture with 42,950 jobs.

This industry also includes subsectors such as Ship and Boat Building, Metalworking Machinery, and Iron and Steel Mills, among others. 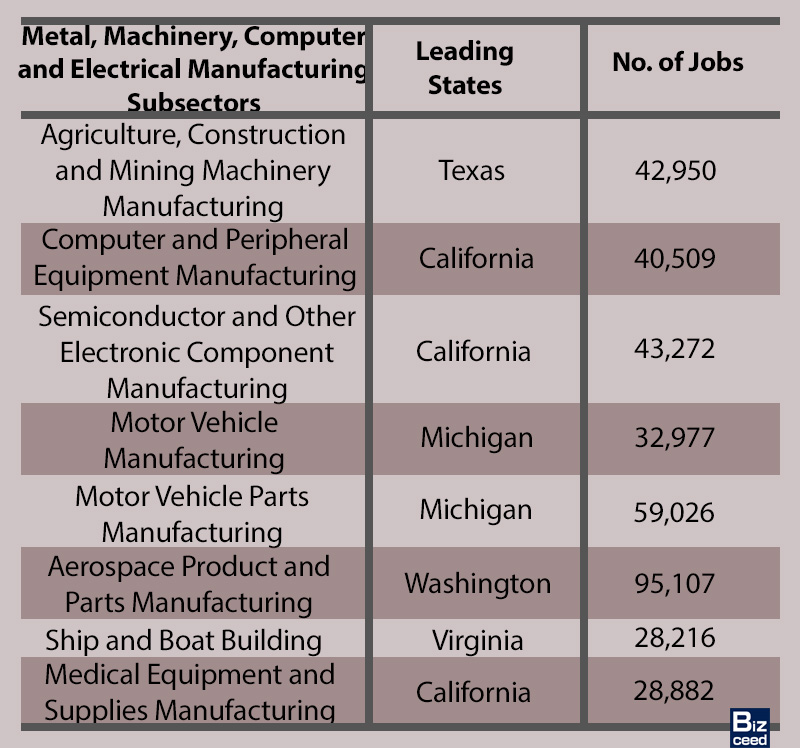 The real estate industry is flourishing in several states especially in California, where Real Estate employment reach 55,043 jobs in 2013. Lessors of Real Estate are highest in Minnesota and Wisconsin generating 15,850 jobs. Florida has the largest number of offices of Real Estate Agents and Brokers with 7,283 jobs recorded in the state. 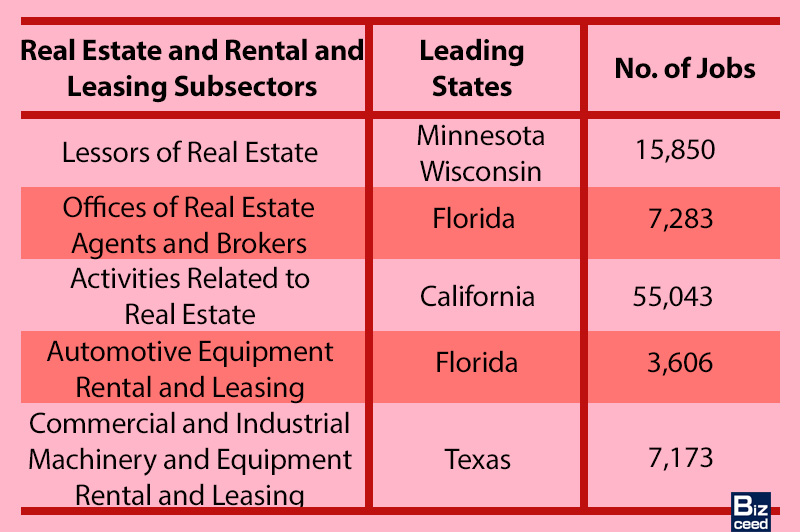 Knowing the standing of the various states in particular industries is truly significant in dealing with your own businesses or even for future ventures. Though the fifty states have diverse economic strengths and potentials, some prove to be more successful and have more promising outlooks than the others. However, each industry and every state certainly is key in making the American economy as vast and attractive not only to local but global entrepreneurs as well.